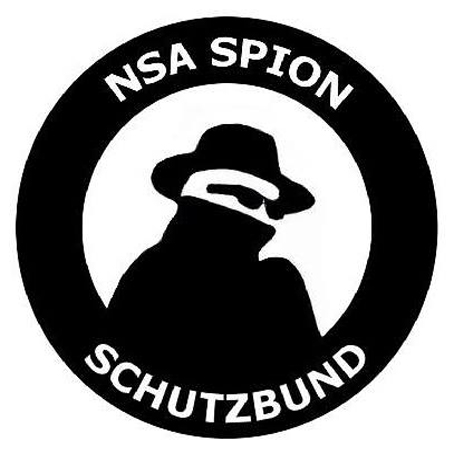 as my input to the Jubilee Walk was unfortunately cancelled, I would like to take this opportunity to thank you for the amazingly great support. Especially to Oli, who has been actively involved from the beginning, to Michael, Gabi, Mareike, Frieder, Isolde and Ellen for the initiative and work of the Alliance: Democracy instead of Monitoring, to the reporters who have even spread the news about the Walks internationally and of course all spy-researchers (online and offline).

Originally I just wanted to take a casual walk, with a few friends and have a look at the enclosure but who could imagine what has grown out of these casual walks. The spies must have been the most amazed.

My actions can be best explained with the word „defiance“.

I know that I, as a little runt can not fundamentally change anything with regards to the Surveillance Industrial Complex but I can continuously show what I think, by putting them into the spotlight, by pestering them and annoying them, thus producing a meaningless administrative burden.

Since the beginning of the Snowden publications, nothing has changed for the better. On the contrary, all of these revelations get more and more overwhelming.

We know that everything which is somehow electronically ascertainable, is stored and analyzed.

We know that with the data obtained, people are harmed and even killed by drone attacks.

We know that „fighting terrorism“ as a justification is absurd.

We know that no „rule of law“ can protect us because the law itself is the culprit.

We know that the knowledge, taught to us in school about government, democracy and politics, does not reflect reality.

We know that our own elected representatives are lying to us.

I could go on and on, but I think it is enough to explain my defiance.

If the key institutions or people think that they can continue like this and even expect us to comply, they have cut themselves. Thus, the defiance is even larger and projects itself onto others.

And together we can be very creative …

In my opinion there is no solution within the box. All states have „skeletons“ in the basement, which have now released a lot of fermentation gases so that it stinks everywhere.

We need to turn the page!

The secrecy must be stopped. Secret archives must be opened and evaluated by journalists and historians. It must be accepted that we are at an impasse and we will not come out with so-called „best practice“.

We need the unvarnished reality to find real solutions. Even if it means that the Chancellor, the U.S. president, corporate espionage or even we ourselves no longer can go on as we have been.

We’re all in the same sinking boat and just turning up the music, will not save us …

The research expeditions to the Dagger Complex will continue. Peaceful, humorous, with sense and reason.

It would be great if branches / partner organizations to the NSASSB would expose other spy shelters. Ideas for joint projects already exist.

(thank you Annika for translation)